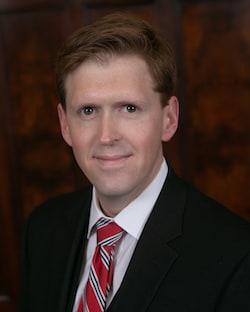 Mr. Walsh represents clients in state court, federal court, administrative actions, and internal grievance hearings. He has appeared before state and federal judges, state and federal agencies, administrative law judges, and hearing officers across Texas and in Washington, D.C. Mr. Walsh also has extensive appellate experience in both state and federal court. He has drafted numerous appellate briefs for intermediate courts of appeal, petitions for review and briefs on the merits for the Texas Supreme Court, and has presented oral argument before the Fifth Circuit, the Federal Circuit, and the Dallas, Austin, San Antonio, and Eastland state courts of appeal.

Mr. Walsh graduated from The University of Texas School of Law with honors. During law school, Mr. Walsh was awarded a three-year endowed presidential scholarship, the Tom Hathaway Memorial Scholarship for Trial Advocacy, and the Dean’s Achievement Award for the highest grade in his Federal Courts class. He participated in the National Security Clinic, was on the Interscholastic Arbitration Team, and studied international and comparative law at University College London. During law school, Mr. Walsh completed internships at the Dallas County Public Defender’s Office and the 14th Court of Appeals in Houston. Before attending law school, Mr. Walsh graduated from The University of Texas at Austin with a bachelor’s degree in theatre.

Recently, Mr. Walsh had the privilege of coaching an interscholastic mock trial team for the University of Texas School of Law. In fall 2018, his team competed at St. John’s University in New York City in a one-of-a-kind competition involving negotiation, mediation, and arbitration.

Legal Certifications and Honors
Practice Areas
Client Reviews
★★★★★
"During the consult, Mr. Castellanos was more than able to illustrate the knowledge and professionalism needed to be successful in representation." RD
★★★★★
"I appreciated [Mr. Castellanos’] respect and professionalism. I like that he liked my case and told me honestly what he believes will be difficult about it." BS
★★★★★
"I am really satisfied with the consultation, he [Mr. Castellanos] was so professional, he really guided me and answered all my questions/doubts. I really recommend Mr. Jairo Castellanos!!" HT
View More
Submit a Law Firm Client Review